If asked someone a question, anyone.  The question was a positive question and 8 of 10, would get you a “yes.” For example, who wants Vanilla Ice Cream for dessert? (asked to children)” Now, you’re the askee, yes, I’m asking you a question.  Hold on, a few rules.  You can’t speak and answer, you can’t shake your head yes and your arms must stay down at your side.  “Do you want a $2000 shopping spree?” Now, how did you react?  How did you show you wanted the shopping spree or were interested?  Using your eyes, posture, smile?  This is how a lot of the kids I support respond, with their whole bodies.  And when they do, wether they say “yes” or “no” I respect it as language and conversation.

Why am I telling you this?  So often, the kids I support, are over looked for what they really understand or can communicate.  Trust me, I watch it happen.  As the advocate, if I say something, it has to be in the right way, to either get child involved (proving they understand) or, to get the person to understand, but not hurt their feelings or step on their ego. Usually it’s that the child has to show their skills by responding, positively, they’re not aloud to say “no” and I frame it to show why it’s communication then the other person begins to adapt.

The other day, I was getting my friend off the school bus. Two teachers, from the school he spent one year at, walked by.  The two of them came into his space, tapped his tray and yelled “hi Jason.” Jason flicked his head up against his head rest and looked at the sky.  He was listening to their voices, to try and remember them.  I saw this and said “I don’t think Jason remembers you, could you reintroduce yourself?” The teacher replied “He remembers me, I was in his class.” I look at Jason, who is showing that he has no recollection of who these two women are.  I say “Jason, do you know who these two ladies are?” He promptly shakes his head no. When I ask them to reintroduce themselves, they pat him on the head, refuse to and walk away.  Seriously?!  Don’t touch me if I can’t even remember you.

The worst was, his response was ignored, because it wasn’t desirable to an ‘able-bodied’ person.  I have quite often heard teachers say over the years say “so and so always says yes and is so agreeable. Why wouldn’t we believe someone that answered clearly for themselves?  Why wouldn’t we trust in the fact that they can make a decision, no matter how small.

As an advocate, I have learned to breathe, say things with cherries on top, so as not to hurt someone’s ego and to keep my mouth shut if someone is trying and doing their best.  The thing that gets me, is the person I’m supporting, that I said I’d be there for, is looking at me, asking me for help to communicate.  But, no, I can’t step on someone’s toes.  I’ve been known to be a bit too passionate about the subject and do some toe stepping, which my clients are usually laughing at the end or giving a “ya” with attitude, wether they can speak or not.  I have been told I am not communicating the right way with someone or how to read their “yes” and “no” and I’m not offended that someone told me.  I’m thankful, because now I can communicate with them properly.

Rarely do people understand where I’m coming from.  That it hurts my soul when the person I support is mis-understood or mis-represented, while trying hard to be understood.  I also don’t know where ot comes from, it’s built right in.  And sometimes I say the wrong thing, can be ableist or am trying too hard to to get someone to understand something, my client could care less about.  But, that’s what makes me sought out by parents and healthcare professionals and have some of the strongest staff working.

We all speak non-verbally anyway.  Way more than we do verbally. you just have to look for it. 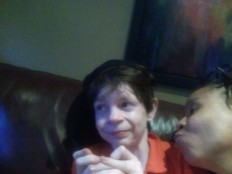 Do it, it will help you live a longer life!!!